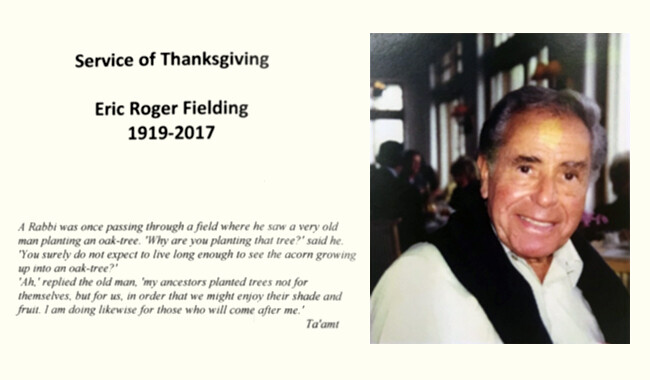 So now I’ve come full-circle, with the memories of my early years of training encapsulated in the most emotional evening I think I’ve ever had. On the 6th of November ’17, Bonnie (my wife of almost 52 years) and I were invited to attend a memorial service in memory of my mentor, Eric Fielding.

He had been living in L.A. for many years but visited the UK frequently to visit his family and friends, always staying with his younger daughter Susie and her family in Kensington. He passed away peacefully at the wonderful age of 98, with his older daughter Jane and her family (the American branch of his dynasty) at his bedside.

We were in touch with each other and always met during his visits to London. If any of you have read my biography, you will know how much he & his delightful family meant to me. I remember his lovely wife Stella who passed away eleven years ago and Jane & Susie who were children when I first started working at the Robert Fielding salon back in 1960.

I was extremely honoured to be asked to speak about a couple of my most abiding memories of Eric, following members of his close family in paying tribute to him. In front of some 100 people I made the following speech:

I’ve been asked to say a few words about Eric and the amazing influence he had on my early years of work. Remembering him is easy for me, as he was part of the very beginning of my hairdressing career when I was just 15 years old.

I still remember vividly the first time I met him. It was in the salon in Regent Street, early August 1960, having left school with the vague idea of becoming a hairdresser but no idea where to start. My sister, who worked in Regent Street, suggested dropping into the salon to enquire if there were any apprentice vacancies. We walked into this hot, stuffy, teeming salon and were asked what we wanted.

30 seconds later this small, handsome man appeared and in a few seconds asked how he could help. I was awe-struck with his charisma, charm and all the other words you could use to describe Eric at his most charming. We made an appointment for my parents to meet and the rest, as they say, is history.

I started my training on August 22nd 1960 & at around twenty past eight that morning I learned my first lesson in doing things the Eric Fielding way. He threw a towel at me & said something like “climb in the window & clean it.” I must have had that “I don’t do stuff like that” look on my face because he immediately grabbed the towel from me, climbed in the window to start cleaning it, turned to me and said ”never ask someone to do something you’re not prepared to do yourself.” The best lesson learned and it will always be with me.

After the business was sold in 1973, Eric & Stella moved abroad. We kept in touch and after they moved to the States, Bonnie & I met them in LA. Every year when Eric came to London we met, chewed the fat and discussed the changing world of ladies hairdressing.

After all these years my absolute respect for Eric and Stella remains & I can only thank your family for including Bonnie and I in this Service of Remembrance for the most charismatic and inspiring man I’ve ever known.