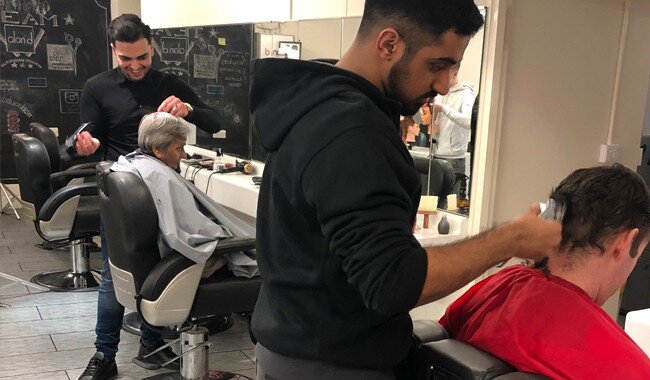 Alan d Hair have been delivering training in hairdressing and barbering for over 60 years. The team tell us they have been in their current premises in Smithfield, London for about 8 years, prior to which, they were based on Oxford Street.

The training room is a buzz of activity with learners practising skills on training heads, and real-life clients too, as members of the public are welcomed in as models every day.

On one side of the room, Claudio, a barbering educator is overseeing some training with two of his learners. Claudio tells us he has been at Alan d for 3 years and has his own barbershop in North West London. He says he started his barbering education at a very young age and trained with Tony & Guy.

One of Claudio’s students, Landi, is due to complete his barbering apprenticeship in March. Landi explains that some of his family and friends were in barbering and encouraged him to follow that route.  Thinking back to when he started his apprenticeship, he explains “I was worried at first but it got easier.”

When asked what he has enjoyed most about his apprenticeship, Landi says “Everything. Getting to meet new people. I love everything.” Once Landi’s apprenticeship is finished, he intends to stay on at the barbershop where he is currently working as an apprentice; however, he aspires to one day open his own barbershop.

Also training with Claudio, is Shannon, who only started her barbering apprenticeship in January of this year. She should complete her apprenticeship around February 2021. Shannon initially took a 3 week course in long hair. Claudio points out this is helpful, as not all men have short hair.

Across the room, we meet Milly and Rochelle. Both are nearing the end of their hairdressing apprenticeships and are due to take their End-point Assessments in just under two weeks.

They explain the various elements that will be covered in the assessment, which includes a colour, a tonal, a cut (demonstrating three different techniques for cutting) and hair up. Whilst both are nervous at the prospect of being assessed, they are confident that they are prepared for it.

Milly has been training in hairdressing for three years, and Rochelle for four years. Milly says what she has liked the most about her apprenticeship is the “good teaching”. They do one day of a week of training, with the rest spent ‘on-the-job’. They describe the biggest challenge of their apprenticeship as: “learning to deal with clients at a young age. Learning to speak to clients in person and on the phone. It’s challenging but they are good skills to learn.”

Milly has a clear idea of what she wants to do after her apprenticeship, aspiring to have her own hair and beauty business one day. A perk, she notes, is that she could even do this from home. Milly’s sense of ambition is clear: “I want to go and do beauty, nails and make-up next. I want to have it all.”

We will carry on with the story of our visit to Alan d, including some special guests, throughout this month as we continue to celebrate apprenticeships beyond National Apprenticeship Week.

Edward Hemmings
Previous Post
What’s the value of employing an apprentice?
Next Post
Alan d Education on the impact of Apprenticeships