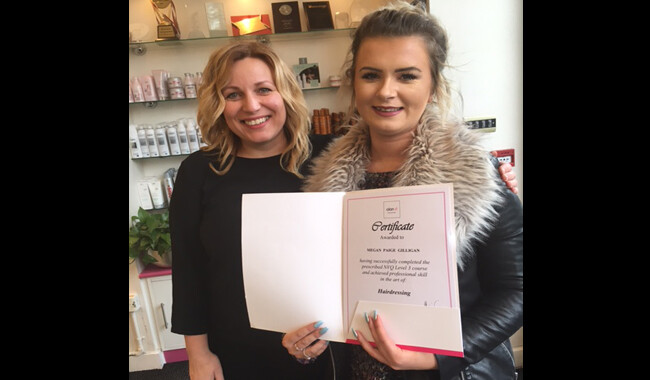 Every so often you come across a story where the plot, the characters, the location and just about everything are perfect!

This month, and with National Apprenticeship Week looming, I want to introduce you to Megan.

Megan’s story starts with an understanding school, who at the age of 14 realised Megan’s heart was not in academic learning. This, though, had nothing to do with academic ability, as she could read and write and had basic maths skills. The school decided that if she could find a placement in a local salon, she could spend up to 3 days per week there.

Megan saw this as a real opportunity and contacted Justine, the owner of Aveda Justify in Ruislip who was only too happy to have her join them. It was here that Megan’s real potential showed. She loved her time there and very quickly won herself a paid Saturday job.

By the time she was 16, she was ready to leave school officially and Justify salon employed her as an apprentice, with Alan d her chosen hairdressing academy. All the faith in her paid off, when, within just over 1 year she qualified at NVQ Level 2. By this time, the skills she learned at Alan d together with regular in-salon training, led her to become a Junior Stylist, running a regular column of work.

Although she always wanted to do NVQ Level 3, Megan decided to stay at the salon for a further year building up a strong clientele before returning to us last year to start the advanced apprenticeship course.

Well start she did and fast-forward to late February 2017, Spring is in the air (well it is today) and we say goodbye to a real success.

Fairytales do happen, and so Megan, good luck with your career and well done to all the players in our story.

If you’re thinking about enrolling an apprentice, call us right now.