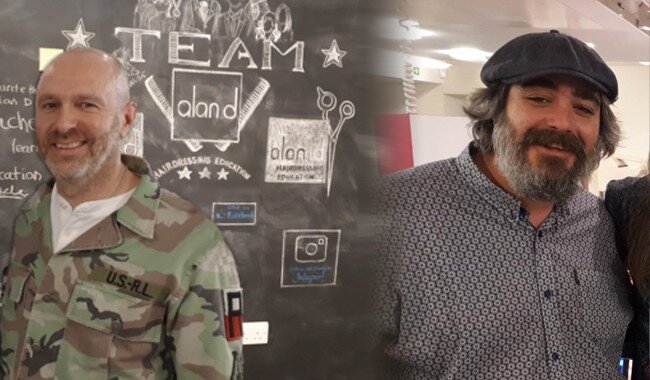 Alan d Education on the impact of Apprenticeships

During National Apprenticeship Week, colleagues from VTCT visited Alan d Hairdressing Education’s London centre. There we spoke to some of the learners and educators about their apprenticeship stories. You can read about the first part of our visit here.

We were able to meet the key figures behind Alan d Hairdressing Education, including founder and Managing Director, Alan Hemmings, Director of Education, Edward Hemmings, and Academies Principal, Kevin Day.

Edward Hemmings has been working at Alan d for 28 years. Alan is, in fact, his father, but it wasn’t always evident that Edward would follow him into the hairdressing industry. Edward tells us he initially went into banking following his A-levels. After deciding a financial career was not for him, Edward fell in love with the salon environment whilst helping on reception at his father’s former Regent Street salon.

“I’ve seen quite a few ex-apprentices owning businesses before their friends are out of university.”

Edward’s passion and enthusiasm for the hair industry and education is apparent, and he posts weekly vlogs on topics relevant to the industry and specifically apprenticeships.

Edward feels “apprenticeships are so, so important” and not just for the hair industry, but across all occupations. He notes that it isn’t just university route careers that are important but it’s “equally as important to be a plumber, maintenance engineer, or hairdresser”; these are all roles that are valuable in our everyday lives.

He is a strong proponent for the apprenticeship route, pointing out that these can really help a young person hit the ground running in terms of their career; he has seen “quite a few ex-apprentices owning businesses before their friends are out of university.”

An apprenticeship provides hands-on experience of the salon environment and helps the apprentice to develop skills that are invaluable for working life. Edward explains, “You’re in the workplace, dealing with people, it helps with your growth.” From speaking to the educators and learners at Alan d, it’s evident it’s not just the technical skills but also the soft skills, such as communication, that are gained on an apprenticeship.

An important change that Alan d Education have embraced is the introduction of the End-point Assessment (EPA); a planned, independent assessment carried out by an Apprenticeship Assessor. This is a requirement of the Hair Professional Apprenticeship Standards, launched in December 2016.

Edward describes the EPA as “brilliant. We’ve been demanding it for so many years.” He feels the new Standards have contributed to “a big improvement in the industry.”

Academies Principal, Kevin Day, is also complimentary of the End-Point Assessment process, and has a key insight, being an Apprenticeship Assessor himself. He notes “Although you’re assessing the learners, you’re also assessing the training provider”, highlighting that it’s not just about evaluating learner’s skills but ensuring they have received adequate training and are not just being “ticked off”.

One positive that Kevin has witnessed since the introduction of the EPA is that “training providers are conscious of wanting to get it right and make the industry stronger for it.”

“apprenticeships are the engine room of every salon”

Kevin has been working at Alan d Hair for 16 years. He tells us he did his own apprenticeship at age 16 with John Frieda. This was an unforgettable experience and saw Kevin meeting an array of famous faces. He notes, due to this, he is comfortable talking to a wide range of people, from teenage students to the rich and famous.

It is the “transferable skills” such as “communicating with people”, that Kevin feels is a key benefit of an apprenticeship. He credits his own apprenticeship with building his confidence and “enabling me to do what I do.”

Kevin describes the potential for apprentices to build up client connections and how this brings opportunities: “they may start with a blow-dry and then later be doing that client’s cuts.” There is a clear path to progression with an apprenticeship and “you are consistently working towards an end goal.” With this goal in sight and with “role models consistently around them”, apprentices have strong motivation through their training.

With the academy reflecting a professional salon in its design, it is easy for the apprentices to embed themselves in the professionalism of a salon environment, during both their time training at the academy and when they are on-the-job with their employer.

For Kevin, the apprenticeship route is invaluable for learners wishing to pursue a career in the hair industry: “you earn while you learn, a bonus for most of them. But they are in a salon environment, there’s no substitute for it.”

A final comment from Kevin that resonates strongly is that “apprenticeships are the engine room of every salon”.

The importance of apprenticeships for salon recruitment, development and growth is paramount. This will be further explored in the final part of our Alan d story, as we speak with further special guests and look at the journey of a former apprentice.